The busy, busy period of country shows and beach games is just about over now, with Lifeboat Day tying it all up and the Scottish children are now back to school. This last month has flown by even faster than all the rest. 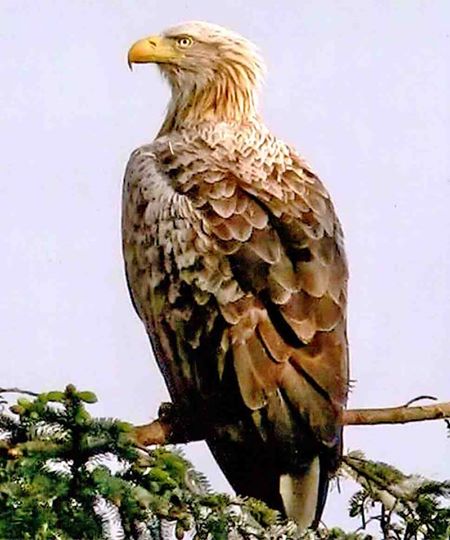 Our female juvenile is doing well after fledging although she still hasn’t gone all that far from the main area of the territory, near the nest. All of this wet and windy weather won’t have been much encouragement to get going so she’s spent a lot of time sat on the grass below the tree line looking wet and miserable. She has managed some good flights above the forest but she’s always managed to come back down in her well known area.

It seems that Iona and Fingal are fairly frustrated with her and spend a good amount of time nearby giving her a glare of parental annoyance; they still want her to make her way to their prime hunting territory over the loch. Despite this, they’ve still been bringing in prey and often spend time down on the grass alongside feasting together. We’ve had great sightings of feeding behaviour with prey items like mackerel featuring a lot – this matches anecdotes of people catching 100 plus in no time at all around the Mull coastline.

We also had some visitors this week that have been enjoying a spectacle – white-tailed eagles hunting gannets! I always say they can and do, but I’ve never been lucky enough to witness that yet. Gannets have a wingspan of 2m, they’re a huge bird in their own right and they’ll be busy feasting on the glut of mackerel.

Despite it only being August the air has a distinct autumnal feel. Rowan berries have burst into colour and hooded crows among others have been making off with large beakfuls. Leaves are turning and falling, on a woodland walk yesterday I was trooping through falling leaves of sweet chestnut and oak. We’ve had a rush of poor weather too, with some strong winds and torrential rain, feeling much more like September than August! Not that I’m complaining, autumn is a great season and one of change. Everything is busy, on the move or collecting up fat stores and caching food.

I was treated to a family group of Jay yesterday with their harsh call, they’ll be preparing for winter now and beginning to cache food, they have an extensive territory map and a brilliant memory. I’m looking forward to hearing the first fieldfare crossing overhead and seeing the familiar v-shape silhouettes of wintering geese.

Eagles and other top predators will begin to change their main prey items as the seasons change too. Fish like mackerel will move off, for example, but other prey becomes more important. Beginning late September and into October our largest deer species begins its annual rut for dominance. The stags don’t fed throughout this period, so many lose fat and stores and many will also be injured. Heading into winter, our eagles and other carrion feeders can cache in on the glut of deer carcasses. Rabbits and hares will also play more of a part as many seabirds leave the coastal breeding area and head out to open waters for winter feeding.

Great news for Mull Eagle Watch, we’ve been shortlisted for the Nature of Scotland Awards under the Innovation category. We’ll be attending the award ceremony in November with naturalist, author and TV presenter, Chris Packham hosting – very exciting!

Thanks for reading as usual. Still looking for webcam chick names, tweet me some ideas or message on our Facebook page! Rachel 🙂

Published by Forestry and Land Scotland