Children got messy making plaster casts of animal hoof prints along the forest tracks before learning about dinosaurs – the ancestors of eagles – with Emily and Kate from the Ranger Service. Over at the eagles hide, they learnt all about white-tailed eagles and enjoyed handling the real eagle feathers and other props but sadly, our eagle family was nowhere to be seen! 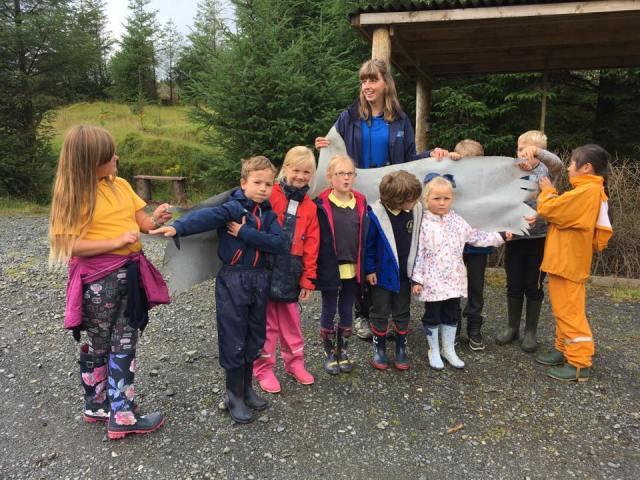 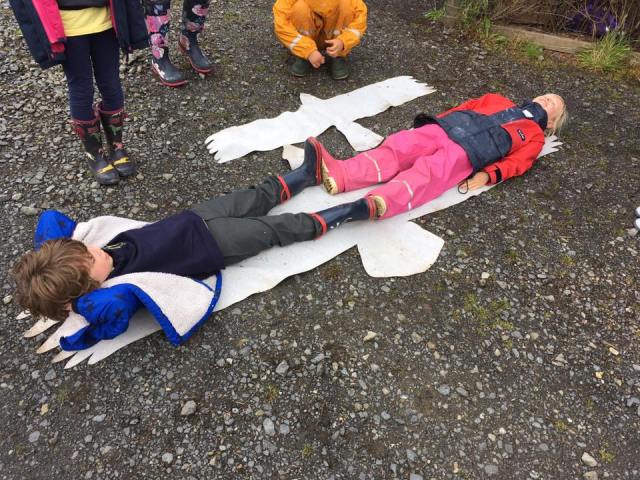 How many children make a white-tailed eagle? (photos: Sue Hawkes)

Over lunch time, with mouthfuls of ham sandwiches and cheesy wotsits, they shouted out name suggestions for our one female chick in the forest and the list was then handed over to John Clare, the Forest Officer, for him to choose the winning name. Which was…

This translates as ‘muse’ or ‘noble-woman’ form Celtic languages. It is also one of the main female characters from J R R Tolkein’s The Lord of the Rings – a half-elf, half human who eventually becomes a queen. A strong name for a powerful bird.

Dervaig Primary School are currently coming up with names for the two chicks at West Ardhu so watch out for these in the next few weeks.

Arwen is the most commonly seen eagle around Tiroran now, with Fingal and Iona proving trickier to track down these days but we’ve been seeing golden eagles, buzzards and kestrels and a juvenile great-spotted woodpecker on the feeders along with the chattering of crossbills high up in the conifers.

Arwen on her parents’ perch

Trips at both hides are running until late September and you can book on a tour by calling The Visitor Information Centre in Craignure on 01680 812556 or by popping in in person. Tours are free for locals.