After a very stressful week last week, I think an update on our beautiful birds is in order! The weather conditions were perfect which was good news for our little chick. We can now confirm there is one little fluffy head in the nest! Anyone any ideas for a name? While everything has been perfect for the chick, Scalla and Anna have had it a little rougher. 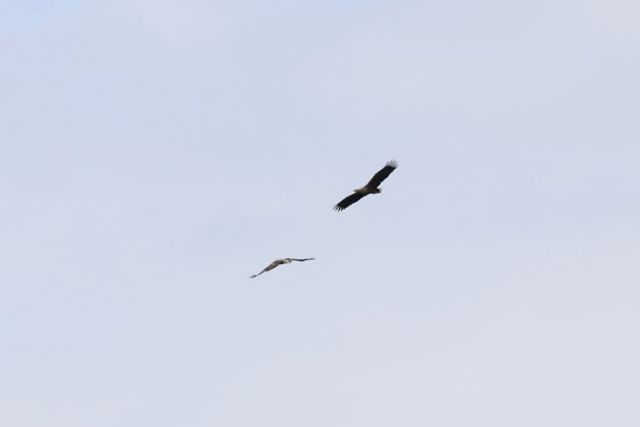 Anna seeing off a Juvenile! Many thanks Mark Morris for the pic.

Starting on the 10th of May, a sub-adult started hanging around. They started by just circling in the area, slowly getting nearer and nearer to the nest as the week progressed. Either of our parent birds would then fly up and see them off. The drama continued as this did not seem to be deterring the wannabe intruder. It was getting closer and closer to the nest. While not a full adult, a young sub-adult would try and invade the nest and we did not want a repeat of last year where the eggs broke, after either Scalla or Anna took off to see another bird away from the nest, accidently piercing the egg as they did so. 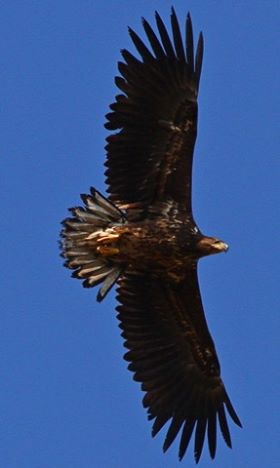 A Fantastic Shot of a Juvenile Eagle, see the black edging on the tail. Thanks Will Plane for the shot.

However, while Ranger Lizzy’s stress levels continued to soar….. Scalla and Anna continued to care for their precious new arrival. The sub-adult gave it one last try, and Scalla had had enough! The two birds were circling each other closely, grappling in the air, and disappeared over the mainland. A very tense half an hour later, Scalla reappeared looking as fine and majestic as always. He and Anna were then both feeding at the same time. A very cute but clear sigh of a strong healthy bond between them. The immature did come back a little later, just to circle around once, showing a large patch of missing feathers and then took off. We have not seen them since! So I think it has finally got the message.

Calm has returned to our little corner of Paradise. We are seeing a fluffy head at least once on all tours, as well as lots of other wildlife, including Arctic and Common Terns, Cuckoo in flight, Otters, Common and Grey Seals, Lots of Oyster Catchers, Common Sandpiper, Dunlin, Little Ringed Plover, Wheatear, Whinchat and so much more!

So come along and join us,
All the Best,
Lizzy and Caoimhe